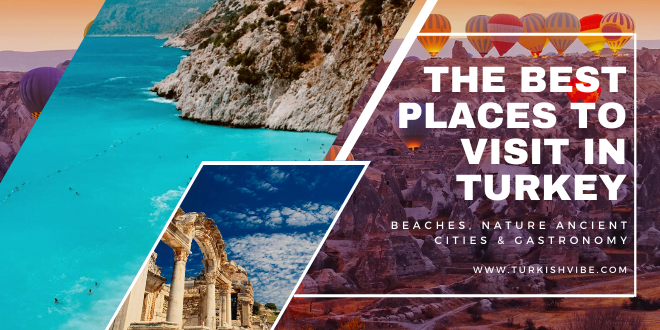 The Best Places In Turkey To Visit! The Most Interesting & Mystical Places!

Turkey is among the countries that receive the most tourist visits in the world. For example, in 2019, Turkey was in the sixth place with 51.2 million visitors. Of course, it is not a coincidence that so many tourists visit Turkey. Turkey is almost a tourism paradise with its history, cultural assets, climate, natural beauties and hospitable people.  Do you know the best places in Turkey?

In Turkey, a Mediterranean and Aegean country, an interesting mosque and church such as Hagia Sophia, museums with many archaeological artifacts, many palaces such as Topkapi Palace, the ancient city of Ephesus mentioned in the Bible, the fairy city of Cappadocia, the magnificent Nemrud mountain is just a few of them… For example, did you know that Santa’s house is in western Turkey?

The Best Places in Turkey for Visit

It is located in Adıyaman, in the south of Turkey. The mountain, which is 2150 meters high, is on the UNESCO world cultural heritage list. There are famous statues and mausoleums on the mountain.What makes this place special is the tumulus and statues of the King of Commagene. The Kingdom of Commagene is an interesting and powerful kingdom that emerged with the mixture of the genes of the Persians and the Greeks. You can check UNESCO World Cultural Heritage List from there: Unesco World Heritage List

It is not allowed to enter the travertines with shoes and slippers. You can walk barefoot. There are many pools that are a source of healing. Swimming in these pools is free. One of the best places in Turkey.

This place is also located in Denizli. It is an ancient Greek city, which is quite advanced artistically, dating to the Hellenistic period. It also has one of the first 7 churches of Christianity.

Cappadocia is the region that emerged when the soft layers formed by the lava and ashes sprayed by the mountains 60 million years ago were eroded by rain and wind over millions of years.

Human settlement dates back to the Paleolithic period. The lands inhabited by the Hittites became one of the most important centers of Christianity in later periods. Houses and churches carved into the rocks have made the area a huge shelter for Christians fleeing the oppression of the Roman Empire.

The region is also famous for its winemaking and grape growing. Air balloon rides are very popular in Cappadocia. One of the best places in Turkey.

Hagia Sophia is a mosque, old basilica, cathedral and museum located in Istanbul. It is a basilica-planned patriarchal cathedral built by the Byzantine Emperor Justinian I in the old city center of Istanbul between 532-537 years. After the conquest of Istanbul by the Ottomans in 1453, II. It was converted into a mosque by Mehmed. It is one of the must-visit places in Istanbul.

Although Istanbul is a city with the richest cultural structures in the world, it is a very big European city with its nightlife that never sleeps. You can find detailed information about Istanbul on our website. It is the one of the best place in Turkey for visit!

Galata Tower is a tower located in the Beyoglu district of Istanbul, Turkey. It takes its name from the Galata district in Beyoglu where it is located. Built as a watchtower by the Genoese during the Byzantine period, the tower is now used as an exhibition space and a museum. It is one of the symbolic structures of both Beyoglu and Istanbul. You can climb the tower and watch the unique Istanbul and Bosphorus view.

It was built on a Roman necropolis in the historical peninsula of Istanbul. After the conquest of Istanbul in 1453, the construction of Topkapı Palace, which was started in 1460 at the request of Fatih Sultan Mehmet, was completed in 1478. And it became the center where the Ottoman Empire was ruled. Topkapı Palace was the administrative, educational and artistic center of the empire for nearly four hundred years, from Mehmet the Conqueror to the 31st Sultan, Sultan Abdülmecid; It was also the home of the sultans.

Located on the European side of Istanbul, it is the city’s largest closed cistern. It is entered from a small building to the southwest of the Hagia Sophia building. The cistern was built by the Byzantine emperor Justinian I (527-565). Due to the many marble columns rising from the water, it is called the Basilica Palace among the people. The building is also called Basilica Cistern because there was a basilica in the place where the cistern is located. The cistern was also the subject of Dan Brown’s novel Hell.

It was an ancient Greek city and later important Roman city on the western coast of Anatolia, on the Ionian coast three kilometers southwest of the Selçuk district of today’s İzmir province.

The city is famous for the nearby Temple of Artemis (completed around 550 BC; BC), one of the ancient Seven Wonders of the World. Among many other monumental structures is the Library of Celsus and a theater that can hold 25,000 spectators. Ephesus was one of the seven churches of Asia mentioned in the Book of Revelation. The Gospel of John may have been written here. It is one of the ancient cities that should definitely be seen in the world. This ancient city is one of the best places in Turkey.

Sümela Monastery is a Greek Orthodox monastery and church complex located 1,150 meters above sea level within the borders of the city of Trabzon in the Black Sea region of northern Anatolia, where there is plenty of greenery.

Gaziantep is the 6th most populous city in Turkey with a population of 2.1 million. It is located at the intersection of the Mediterranean and Southeastern Anatolia regions and reflects the eastern culture in its texture. Gaziantep is home to the world’s largest mosaic museum. The world-famous “Gypsy girl” mosaic in the Zeugma museum is located here.

Gaziantep’s most important position in the world is its cuisine. Gaziantep has a very rich cuisine, with a total of 300 types of food. It is Turkey’s city of taste and gastronomy. Antep cuisine is especially famous for its kebabs, meat dishes, pot dishes and desserts. This is the homeland of baklava. Gaziantep was included in UNESCO’s Creative Cities Network in gastronomy in 2015.

Some famous beach cities in Turkey

Ölüdeniz is located in Fethiye district of Muğla province. Ölüdeniz beach was chosen as the most beautiful beach in the world in 2006 with eighty-two percent of votes. The town is quite developed in terms of tourism. The land of light and sun in the Lycians, known as the “Far Land” in the Middle Ages, is located on the Teke Peninsula in the southwest of Anatolia. It is one of the lagoon formations in Turkey.

Kaş is a touristic town located in the westernmost part of Antalya. Around Kaş, there are many ancient cities such as Istlada, Apollonia, Isinda and Kyaenai, as well as many unknown ruins. Kaş is among the important centers of Turkey, especially in terms of diver tourism and paragliding.

Patara (Lycian: 𐊓𐊗𐊗𐊀𐊕𐊀) is a Lycian city near the Kalkan town of Antalya’s Kaş district and was the capital of the Lycian League. It is known that it was among the cities besieged by Alexander. Patara was also a very important city during the Roman period and was the capital of the Lycian-Pamphilian states. The famous Patara beach is located 1 kilometer from the ancient city. It has the title of the longest beach in the world with its 12 km coastline and 1500 meters width. The beach, which consists of fine sand, is also the spawning ground of Caretta Caretta turtles.

Bodrum is one of the 13 districts of Muğla. The district is known as an important tourism center today, which is due to the fact that Bodrum has some unique features. Bodrum is a district known not only in Turkey but also in the world in terms of tourism. It is one of the most attractive touristic locations in the world with its famous coves, ancient cities, castles, shopping stores and night clubs. Bodrum is the one of the Turkey best places.

Marmaris is one of the 13 districts of Muğla. It shows similar touristic features with Bodrum. There are many ancient cities in the region. Marmaris Bay, which is a natural harbor, has three marinas with a capacity of 1100 and 9 dockyards with a capacity of 1200 yachts. In order to develop yacht tourism in the region on the Blue Cruise route, International Yacht Festival and International Marmaris Yacht Races are organized every 5 years.

Alaçatı is a neighborhood in the Çeşme district of İzmir. It has a coast on the Aegean Sea. It is famous for its historical stone houses and beaches suitable for windsurfing as it gets winds 360 days a year. Especially in the field of sailing water sports, it is among the most preferred places thanks to its wavy sea.

You see some of the Turkey best places in this article. These are just a few points in Turkey’s tourism. We have not included many touristic cities such as Istanbul, Izmir, Antalya, Mardin in this article. We will also publish articles for places to visit in these cities. I hope you liked the list we prepared for you. So where did you visit in Turkey? 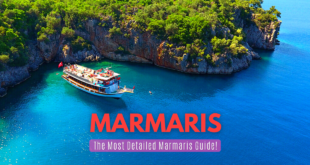 Detailed Marmaris Guide! The Best Things To Do In Marmaris!